Hello!–I was recently assigned the task of casting my “movie”.   Here is my response as it appears in Campaign for the American Reader.

Wachtel applied the Page 69 Test to her new novel, A Castle in Brooklyn, and reported the following:

A Castle in Brooklyn is a story about family and friendship. It is also a story which conveys the importance of home, taking us through the dream of establishing a home in a new land, and how the home remains a symbol of all of its inhabitants’ aspirations. Jacob survives a heart-wrenching trauma at the hands of the Nazis, and ultimately escapes from Europe to begin a new life in America. His lifelong dream is to build a home, a dream which he accomplishes with the help of his friend, Zalman, someone who was by his side during his daring escape. Esther, a young immigrant from Poland, gives up her own dreams of a career in real estate when she becomes his wife and, along with Zalman, the three live together in their “castle” in Brooklyn. But when an unexpected tragedy occurs, Jacob’s friendship with Zalman is put at risk, and so is his marriage. 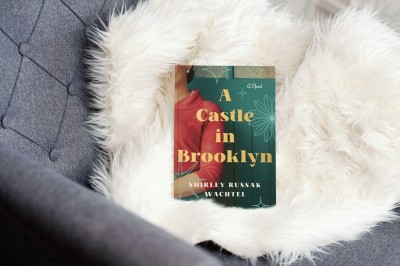 While I do not write a novel with casting in mind, it is fun to consider which actors might be best suited to play the central characters in my book. I believe Benedict Cumberbatch might be well-suited to play Jacob. Cumberbatch’s roles which include The Power of the Dog and The Imitation Game, reveal his ability to play characters who are determined to fulfill a goal, yet haunted by a mysterious past. Jacob is a reticent, but determined, character who is haunted by memories of family, so I think this actor would ably fit the role.

Natalie Portman is someone who has shined in her roles in Black Swan, Jackie, and as a super-hero in Thor. She would make a worthy Esther because, like other characters Portman has portrayed, Esther is someone who seems to play a subservient role at first, but later becomes a strong, independent woman who overcomes the worst of tragedies.

Zalman is Jacob’s faithful, hard-working companion who abandons a former life to be at Jacob’s side. Secretly, he is tormented by feelings he cannot understand, and is forced to make a difficult decision. Mark Ruffalo is a good choice for this role as in I Know This Much is True and The Kids are All Right, he portrays loyal individuals who must come to terms with their emotions. Physically, his stature resembles the way I imagine Zalman.

Florrie is a character I have much affection for. She is a good-humored next-door-neighbor who becomes a lifelong friend to Esther, seeing her through the hopeful and dire times. Minnie Driver has shown her capacity in a wide range of roles including Good Will Hunting and Circle of Friends. She would bring joy and compassion to the role of Florrie.

Finally, if I could choose a director for the movie version of my book, it would be Charlie Wachtel. Charlie Wachtel is currently working on his first project as a director, and in 2019 won the Academy Award for Best Adapted Screenplay for BlackKklansman. Charlie would make the perfect director for my novel since he has a deep understanding of my characters and would make a film that will resonate with viewers. Also, Charlie is my son!

For more on Shirley Wachtel visit her Twitter perch.  For more about her latest book visit The Page 69 Test: A Castle in Brooklyn.