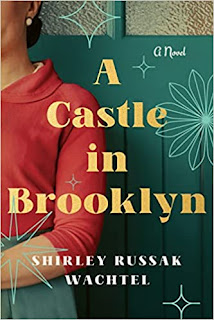 Shirley Russak Wachtel is the author of the short story collection Three For A Dollar, the book of poetry, In The Mellow Light, and several books for children. Her short stories and poems have appeared in various literary journals. A daughter of Holocaust survivors, Wachtel was born and raised in Brooklyn, New York. She holds a doctor of letters degree from Drew University and for the past thirty years has taught English literature at Middlesex College in Edison, New Jersey. The mother of three grown sons and grandmother to two precocious granddaughters,she currently resides in East Brunswick, New Jersey, with her husband, Arthur.

Wachtel applied the Page 69 Test to her new novel, A Castle in Brooklyn, and reported the following:

The following excerpt appears on page 69 of my book:

“What is it? What’s happened?” She leaned over, trying to make sense of the paper Jacob held in his trembling hand.

“It’s from your father,” he said, finally finding the words, “and it’s a deed for a parcel of land in Brooklyn.” The simple paper was beginning to feel like a fire in his hands.

She touched his arm lightly.

‘I don’t understand. What does it mean?” He looked at her face, her pale skin, her eyes a serene blue.

“It means a house, Esther, it means we can build our own house.”

Jacob eased back into the brown leather recliner, but he didn’t turn on the TV to watch his favorite show, instead the couple sat talking, planning their future, for hours into the night. When they finally settled into their queen-sized bed, their heads abuzz with their plans, their prospects, neither fell asleep until the soft edge of a sun could be seen rising over the city’s gray skyscrapers. So, it wasn’t until late the next morning that Esther found the unopened letter next to the recliner on the plush green carpet. Jacob recognized the writing immediately. When he finished reading, he looked at Esther, tears forming in his eyes.

“Another big piece of news. Zalman is coming home.”

This excerpt from my book does indeed prove Marshall McLuhan’s theory that book browsers can get a good idea of a book from page 69. The scene is a pivotal one in A Castle in Brooklyn as it reflects the heart of my novel. Jacob, having escaped near-death at the hands of the Nazis, comes to America determined to build the home he has always dreamed of. For him, the home would be a castle! This dream sustains him during the worst of times. In this excerpt, the newly married Jacob is in an apartment with his wife, Esther, when he receives news that his wealthy father-in-law has given them a piece of property to build a home. Shortly after, he discovers a letter from his best friend, Zalman. Zalman means the world to Jacob, for it was he who was at his side during their capture and escape in Europe. Though Zalman is now working on a farm in Minnesota, the letter reveals that he has plans to come to Brooklyn. Jacob hopes that together they can build the home of his dreams.

The scene on page 69 is pivotal to the novel as it sets the wheels in motion for the building of the home in Brooklyn, but also the trajectory of Jacob’s relationship with Zalman. As an architect, Zalman is key to helping make Jacob’s dream a reality. As such, once the house is built, Jacob urges him to stay with him and Esther in the home as their family grows. However, an unforeseen tragedy changes everything, testing the bonds of friendship and even Jacob’s marriage.

I marvel at how accurate McLuhan’s prediction was for A Castle in Brooklyn, which in essence, is about someone who stubbornly holds on to the dream of home and family, despite the odds. Once that dream is accomplished, he is tested time and time again, ultimately realizing his dream far into the future. While A Castle in Brooklyn is the story of a Holocaust survivor who builds a home in Brooklyn, I believe it is also about anyone who holds onto a dream, and anyone who values the importance of friendship, love, and family.